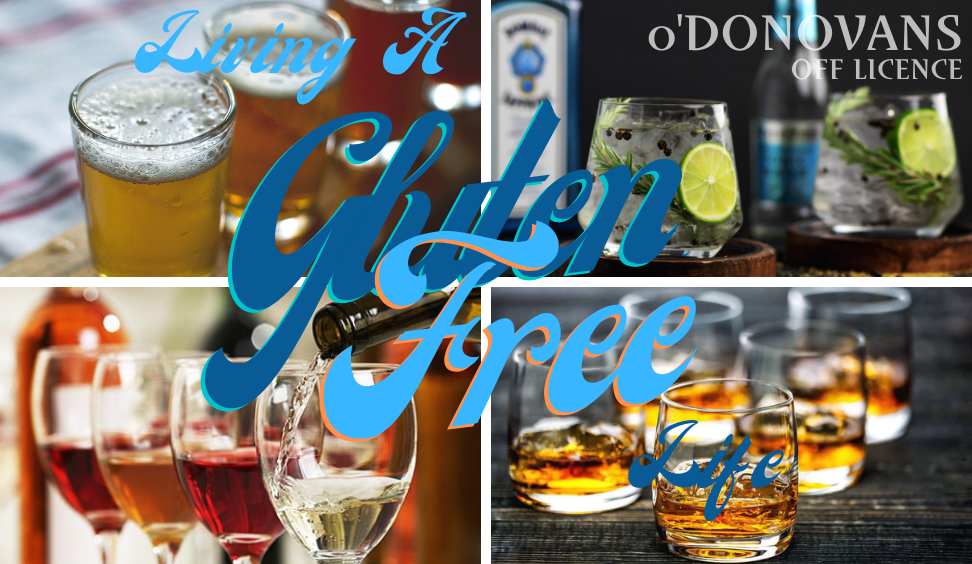 Whether you are Gluten intolerant or suffer from coeliac disease, we at O’Donovans off Licence, try to make it easy for you to still enjoy a few drinks.

Between both, coeliac disease and gluten intolerant there is an estimated 450,000 people suffer across Ireland.

What we are noticing that it is a lot easier these days to control your gluten free diet, with the supermarkets offering a huge range of gluten free food products. We at O’Donovans off Licence, also want to make life easier for you, so we are increasingly adding to our gluten free range of alcohol beverages.

It can get a little overwhelming when it comes to knowing what is safe for a gluten free diet, and what is not… So hopefully this piece will make it a little clearer for you…

So just to talk you through, what alcohol is gluten free friendly….

Obviously alcohol that is brewed or distilled using no gluten ingredients and which is labelled gluten-free is the safest bet. But that said, that doesn’t mean that is all there is to offer…

So even when a cereal containing gluten is an ingredient in the fermentation process of a spirit, the distilling process removes any trace of gluten.

Alcohol distilled or fermented from non-grain ingredients, and which contain no gluten additives or flavourings are the safest choice, as they are naturally gluten-free from start to finish. But that’s not to say that other spirits, that the gluten is removed through the distilling process are not safe. You just need to find what best suits you…

Another great choice for a gluten free diet, would be Cider, all ciders made from apple, pear or other fruits, are gluten free, they are made from 100% pressed fruit, and do not contain any wheat, barley or rye.

Cider is the ideal choice for something tasty and refreshing, with craft cider becoming an increasing trend, the only problem you will have is choosing which one to go for. As the market continues to develop, different varieties are readily available.

At O’Donovans we are always adding to our craft section, and keeping it local, Stonewell Cider made in Nohoval, Co. Cork is very popular amongst our cider customers.

Beer is the one drink that you need to be careful, and avoid anything that does not state it is gluten free. Traditionally Beers are made with water, hops, yeast and barley.

Water being the main ingredient in any beer, it comprises of about 90% of the final product. Hops would generally be used to give the beer its unique flavour, while Grain is the source of sugar for the fermentation process, the most commonly used are barley, wheat or rye. Finally the yeast, while we know that cereal or grain is not gluten free, yeast can be misleading. Most brewer’s yeast is not gluten free, as it contains gluten from the barley used to make the beer. Some brewer’s create yeast using sugar beets, this yeast would be gluten free.

So swapping the wheat or barley, with gluten free grains such as sorghum, rice, or millet, makes a beer gluten free.

Whether you are gluten intolerant or have coeliac disease, when it comes to beer, you have to be really careful of the gluten content in a beer.

The amount of gluten in a beer is measure by ppm (Parts per Million). In Ireland anything below 20ppm can be considered gluten free. Some beers on the market such as Heineken, Budweiser and Coors, technically are under the 20ppm, but because they are made from barley, they cannot state they are gluten free.

Gluten Free Beer is not very readily accessible, but there is a few options out there. We at O’Donovans try to have a mixed choice for the consumer, and again keeping it local, Cork based brewery 9 White Deer has launched its Stag Saor range. This was the first brewery to produce the first gluten free beer in Ireland. The brewery has since grown its range, and now even have a gluten free stout available. The full range is available at all O’Donovans stores.

The best news is most Wine is also gluten free and is safe to consume on a gluten free diet.

Wine is made from grapes which are naturally gluten free. When going through the fermentation process gluten is also not added, the only area to be cautious of is another process of wine making, with is called fining.

This is where substance are added to the wine to clarify it, potentially this could cause gluten contaminants to enter the bottle.

Generally after fining, the wine is filtered out, but small particles may remain behind in the bottle. For someone who is very sensitive to gluten, this could be harmful, but after the fining process and filtering the particles would be much lower than the 20ppm. So there for the wine is still classed as Gluten Free.

If you are unsure on any of the above, please call in to any of our 8 stores, our trained staff will help you choose what is best for you.